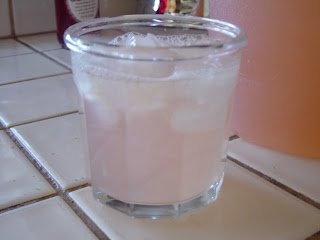 Some history...
"Henry E. Allott, known all through the Middle West as 'Bunk' Allen, member of the old Chicago gambling syndicate, saloonkeeper, theatrical promoter, circus man, and inventor of pink lemonade, died here today. At 15 he ran away with the circus and obtained a lemonade concession. One day while mixing a tub full of the orthodox yellow kind he dropped some red cinnamon canides in by mistake. The resulting rose-tinted mixture sold so surprisingly well that he continuted to dispense his chance discovery."---
"Inventor of Pink Lemonade Dead," New York Times, September 18, 1912
Sorry gals, it wasn't some Southern Belle in the deep South, on a plantation somewhere, who invented one of America's favorite Summer beverages...
It was actually a 15 year old carny GUY! Wouldn't cha know it...
Regardless, we love drinking it in my house! And my boys love to show off their muscles when it comes time to use the glass juicer. Here is our super-duper easy version of an old favorite - 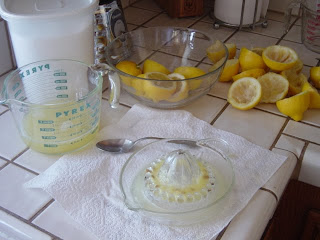 **Don't forget to seek out local lemons...SUPPORT YOUR LOCAL FARMER!"

Email ThisBlogThis!Share to TwitterShare to FacebookShare to Pinterest
Labels: Beverages

Oh, I bet the grenadine makes it super yummy. I'll have to try this recipe when I have ripe lemons on my tree. Right now, they are green. Thanks for sharing!

Welcome back to my archaic blog. Started years ago as merely a creative "mommy" outlet, now, it is simply therapy for boredom. ;) ...

ReluctantYankee
How I miss the South... After living in Georgia years ago, I quickly realized I'd never be the same! Lovely landscape, lovely people and fantastic food. This blog began as a little tribute to my many wonderful memories of one of the places I love the most. Now, it is a celebration of the past (Georgia), present (So. Calif.), and future! Don't forget to check back for recipes, fun crafts, and new adventures. Stop by often!!

My New Addiction...come on, all the kids are doing it ;)